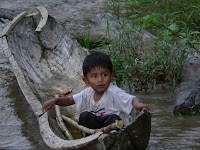 One of Latin America's last tribal kings has been exiled after approving a hydroelectric project that tribal members say will disrupt the environment and way of life in their pristine jungle home.

Reuters reports that Tito Santana, tribal chief in Panama, was exiled by the tribe and his uncle Valentin Santana took over.

King Tito is one of the few tribal kings recognized by a government as the maximum authority of the Naso tribe.

Photo: DreamTravelPanama, Tribe children
Posted by Alison at 10:28 AM