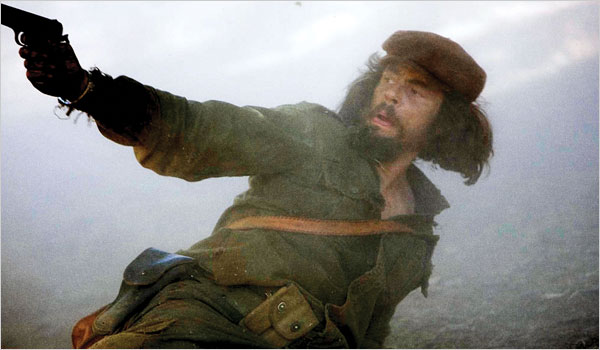 Most of the reviews by the press of the film were mixed, as was evidenced by Guardian UK film critic Peter Bradshaw:

Perhaps it will even come to be seen as this director's flawed masterpiece: enthralling but structurally fractured…

This is all about Che the warrior, the ideologue, the public man. It is big, bold, ambitious film-making. Yet I was baffled that Soderbergh fought shy of so many key things in Che's life. Maybe he felt the spectacle of revolution incarnate was more compelling: a secular Passion play. Whatever the reason, Che is never boring and often gripping.

The “Che” biopic isn’t the only Latin American film making waves at Cannes. “Motorcycle Diaries” director Walter Salles has his own entry for the judges to watch, while a documentary on Argentine soccer legend Diego Maradona is also being shown.