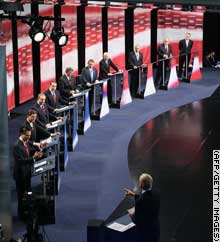 Ten Republican presidential hopefuls met last night in a debate remembered for the constant mentioning of Ronald Reagan and some differing over President Bush’s policies. Regarding the latter, several of the candidates commented over the issue of immigration (via Forbes):

“The status quo is not acceptable. We have to secure our borders. But we also need a temporary worker program, and we have to dispose of the issue of 12 million people who are in this country illegally. This issue is an important and compelling one, and it begins with national security. But we also need to address it comprehensively."

“No more platitudes, no more obfuscating with using words like, 'Well, I am not for amnesty, but I am for letting them stay.' That kind of stuff has got to be taken away from the political debate, as far as I'm concerned, so people can understand exactly who is where on this incredibly important issue.”

“Right now, the border is 2,000 miles of a very porous area where hundreds of thousands of people come across on an annual basis…Some from communist , some from , some from . We have to secure the border. That's the biggest failure of the federal government."

Meanwhile, the immigration debate in Congress may heat up as Democrats are considering introducing their own proposal.

''Squat and Drop should not make anyone an American''... Close the boarders now ! If you're offended by the American Flag, call 1-888- Leave America Now ! I'm a female conservative republican of latin decent *American* 1st and I'm tired of all the bullshit of the immigration debate, just send anyone who wasn't born here back to their country ! we don't need them in our country and for those Americans who don't want the jobs that they do kick them to the curb!Let them figure it out lazy is what lazy does... Mz, **AMERICA*