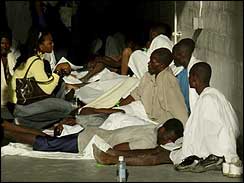 "It'll probably continue like this through the summer…every summer is busy.”

366 Haitians who tired to enter the were deported yesterday; not included in that group were over 100 Haitians who arrived on Floridian shores in late March (image).

On a slightly related note, 13 Cubans are currently at a Border Patrol facility after arriving near Key Biscayne this morning.