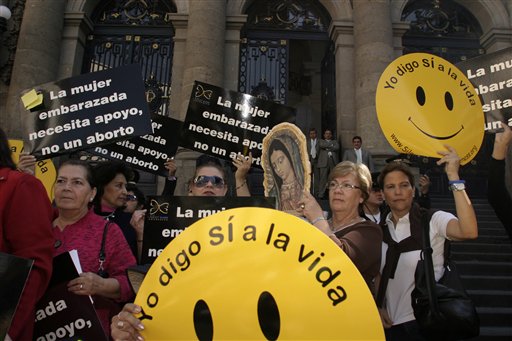 Public support and outrage has grown over the past few weeks over a proposed measure which would allow abortions during the first trimester of pregnancy. Proponents of the abortion bill claim that the too many pregnant women, especially from poorer backgrounds, are endangering their lives conducting illegal procedures. According to one federal legislator behind the abortion bill:

“We are in favor of women's life. We don't want women to stop their pregnancies ... but we have a stubborn reality.”

On the other hand there are detractors of the measure, especially conservative political groups and the Roman Catholic Church. They were behind a “pilgrimage for life” demonstration on Sunday (image) in even though ’s constitution bans religious organizations from political activity. (That didn’t stop a Latin American Roman Catholic group from publishing ads in Mexican newspapers defending legalized abortion).

Most Mexicans support birth control though the country is nearly split in half over decriminalizing abortion.