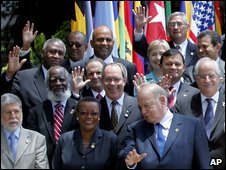 Western Hemispheric countries could not reach a deal over readmitting Cuba to the Organization of American States (OAS) claimed U.S. Secretary of State Hillary Clinton.

Before departing the OAS summit in Honduras, Clinton said that the “Obama administration is obviously pretty much by itself” in terms of how to allow Cuba to return. Though she admitted that some countries were fine with the U.S. plan, others were reluctant to give in to preconditions on human rights, political prisoners, and elections.

One of the most vocal leaders backing Cuba’s readmission was Nicaraguan President Daniel Ortega who said the 1962 expulsion of Cuba was "imposed by tyrants." His proposal called for readmitting Cuba sans clauses while two other plans were presented seeking a compromise. The lack of consensus may create the real possibility that Cuba is let in to the OAS without conditions.

Oddly enough, the whole debate may be moot and irrelevant; the Cuban government has repeatedly rejected overtures to return to the OAS.