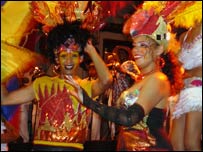 With the New Year fast approaching perhaps one of your resolutions may be to take a vacation in the Americas. Here are some options you may want to consider:

* With the increased anxiety over global warming, more and more tourists have opted to visit locations endangered by climate change such as the Amazon rainforest and the Galapagos Islands. According to the International Herald Tribune, one visitor went to the Amazon “before it was turned into a cattle ranch or logged or burned to the ground.”

* Perhaps eco-tourism isn’t your cup of tea and you would much rather do something a little more selfish. Then why not travel to Colombia and get cheap plastic surgery; one procedure that cost as much as $40,000 in the U.S. only cost a quarter as much way south of the border, for instance.

* Are you a television writer sick of being on strike for over a month? Then maybe take a trip to Argentina where unionized extras received an 18% to 20% pay increase earlier this month.

* With all the press coverage of Hugo Chavez you might want to visit Venezuela and check out the situation for yourself. According to Bloomberg, Venezuela has experienced a travel boom partially based on favorable exchange rates for visitors.

* Then again, not everything is rosy for certain tourism sectors; though Jamaica is one of the most sought after Caribbean destinations, the island’s tourism has diminished in quality according to a recent survey.

Workers are very well organized in Argentina and that is how they get what they want. You may not believe this, but truck drivers are the ones with the highest salary in the country. I travelled to Argentina last year and rented buenos aires apartments. The real estate lady told me that truck drivers have a leader called Hugo Moyano that was aligned with the President Cristina. Now apparently the had an argument and seem to be disagreeing in most of the matters. I would have to keep posted in order to know what happens with those two!