El Salvador to withdraw from Iraq 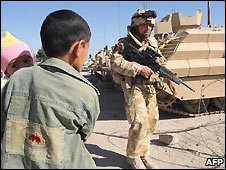 The last Latin American contingent to have troops in Iraq will leave the country by the end of this month.

According to remarks made today by Salvadoran President Tony Saca, troops will withdraw from the country on December 31st. "Considering the lack of a United Nations resolution, the government of El Salvador decided to end our presence in Iraq," Saca said.

Honduras, Nicaragua, and the Dominican Republic were the Latin American nations who used to have troops as part of the coalition force and then withdrew in 2004.

The current (and final) Salvadoran contingent contains 200 troops. Five Salvadoran soldiers have been killed in the over five years they’ve been stationed in Iraq.

thank God, and all else they are coming home
and all knowing they were just cannon fodder for Halliburton

IMPEACH and hang in public, all involved