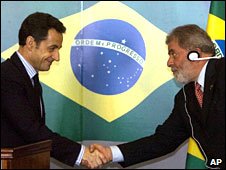 As we mentioned this morning, France and Brazil will sign several key agreements today during Nicolas Sarkozy’s visit to Rio de Janeiro. One of them is a defense agreement that will make Brazil the first South American country to own a nuclear-powered submarine.

In addition, Sarkozy advocated an increased role for Brazil in global affairs. Sarkozy said that he will help bring more attention to Brazilian proposals at the next G20 summit in April. The French president also discussed about the U.N.:

Sarkozy…earlier backed Brazil's claim to a permanent seat on the UN Security Council, saying the country had a vital role to play in global decision-making during the financial crisis.

"I'm being honest when I say we need Brazil in world governance," he said.

“I think we need Brazil as a permanent member of the Security Council."

Brazil does not honor the Hague Convention on International child abduction, if they can't honor treaties concerning the protection of children, why do they deserve this UN seat?
www.bringseanhome.org