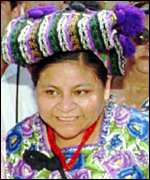 Politicians linked to Bolivian president Evo Morales expressed his support for Nobel Prize laureate Rigoberta Menchu (image) in her bid for ’s presidency. A key senator to Morales’ Movement Towards Socialism party said that they would send an advisory group to “accompany and support comrade Menchu.”

Morales was elected as ’s first indigenous president and indigenous leader Menchu certainly hopes to emulate in his footsteps and be elected to the presidency.