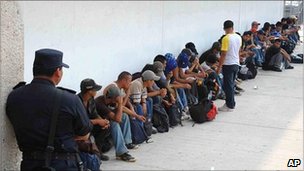 * Mexico: Police at a checkpoint in southern Mexico found 513 migrants crammed into two trailers reportedly destined for the U.S.

* Honduras: Rasel Tome, the legal advisor to ex-president Manuel Zelaya, claimed that the former leader would return from exile during the weekend of May 27 to 29.

* Venezuela: Venezuela’s economy appears to be bouncing back and emerging out of a recession.

* Costa Rica: Costa Rica will replace Japan in the Copa America after the Asian country withdrew from the South American soccer tournament.

Image – AP via BBC News (Most of the 513 migrants were from Guatemala though a few were from countries as far away as Japan and India).
Online Sources- Bernama, Al Jazeera English, Bloomberg, Monsters and Critics
Posted by Erwin C. at 9:30 AM