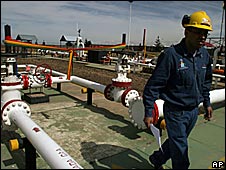 * Argentina: Japan officially withdrew from this summer’s Copa America in Argentina due to several factors including a recent major earthquake and tsunami.

* Brazil: A Brazilian court convicted two U.S. pilots for their role in a 2006 crash though they will not serve any time in prison.

* Canada: Canadian immigration officials are set to deport a gay Nicaraguan man who “made headlines” in 2007 after he was refused refugee status when authorities “doubted his sexual orientation because he hadn’t pursued men.”