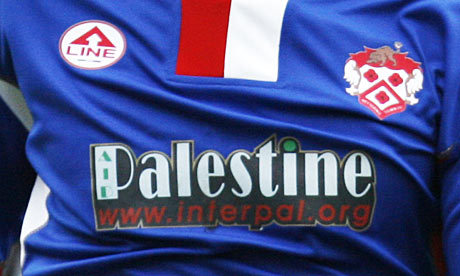 The sport of soccer is sometimes referred to as “the beautiful game”. Beyond glamorous goals and stunning saves, the saying becomes especially true when a charitable effort is involved:

Shirts worn by players in an FA Cup tie tomorrow will be the unlikely advertising hoarding for the plight of Palestinians. Kettering Town will have the slogan Palestine Aid emblazoned on their kit to show their support for Interpal, a charitable organization which distributes aid in the Palestinian territories.

"We are trying to raise awareness and charitable funds for the refugees in Palestine," Imraan Ladak, the Kettering chairman, said of the association with Interpal that began before the escalation last month of the conflict in Gaza.

Ladak, 30, chief executive of a recruitment business based in Milton Keynes, has no personal links with Palestine. "I just think there are certain areas in the world that are in desperate need of humanitarian assistance, for whatever reason," he said, "and Palestine is the one that's suffering the most.

Some soccer club uniforms are littered with all sorts of sponsors which makes a player look like a walking billboard. Other clubs (like my favorite team) are actually named after a particular sponsor. Yet in recent years some clubs have opted to enter into partnerships with charitable groups like the case of F.C. Barcelona and Argentine side Boca Juniors with UNICEF.

"Last week, the Lebanese army attacked a squalid Palestinian refugee camp that's become infested with Islamist suicide terrorists and guerilla fighters. On May 20, government troops surrounded the camp, with tanks and artillery pieces shelling it at close range. Army snipers gunned down anything that moved. At least 18 civilians were killed, and dozens more injured. Water and electricity were cut off. By week's end, much of the camp had been turned into deserted rubble. Thousands of terrified residents fleeing the camp reported harrowing stories of famished, parched families trapped in their basements."

A big thanks to the team to show their courage and stand up for justice in this world.
I'll be one of the team biggest supporters ;)

Keep up the good work