Chile to sue over false disappeared 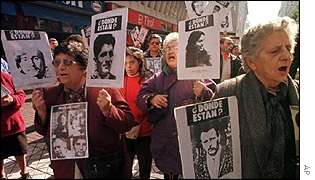 The Chilean government plans to sue the families of three people who claimed to have disappeared during the Pinochet dictatorship but were later found out to be lying.

Investigations by victims rights groups revealed that three of those listed among the 1800 officially disappeared had either lived years after Pinochet ceded power or had died in 1955. Some of the families of the false disappeared had received government funds for victims of the regime; thus, the government has taken to the courts to see if there are any more fake claims.

President Michelle Bachelet- who was tortured herself during the military regime and whose father was killed for dissent- vowed that she will not “permit that this historic truth is thrown into doubt.”

It remains to be seen what the Chilean judicial system plans to do about the false disappeared scandal, especially after a pair of controversial Supreme Court rulings on Friday:

The Chilean Supreme Court has reduced sentences handed down to five agents of the country's 1973-1990 military regime for the disappearance of two leftists, judiciary officials said…

On Jan. 21, an appeals court in Santiago had upheld a 15-year sentence given to ex-DINA chief retired Gen. Manuel Contreras and two erstwhile colonels, Marcelo Moren Brito and Rolf Wenderoth.

But the Supreme Court, in a 3-2 ruling, reduced Contreras' sentence to seven years; the judges also reduced the sentences for Moren and Wenderoth to four years each…

In another 3-2 decision Friday, the Supreme Court ruled against victims' family members who had sued the state for reparations for the dictatorship-era crimes.