How much are those tortillas in the window? 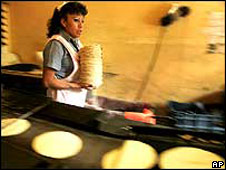 The price of tortillas in Mexico could jump by as much as 40% according to the country’s “tortilla chamber”. The price of the Mexican food staple could spike next month to 12 pesos ($1.14) per kilo compared to the current 8.5 pesos per kilo according to the president of the National Association of the Dough and Corn Tortilla Industry:

Higher costs from rising gasoline prices and the hoarding of corn by producers are also behind the expected surge in tortilla prices, Milenio cited Martinez as saying. Tortillas need to be more costly to keep 10,000 tortilla shops open and prevent 50,000 job losses, said Martinez, according to Milenio.

The Mexican government has tried to downplay worries over a spike in tortilla prices by emphasizing that any increase will “not (be) by the exaggerated sums mentioned.”

Anxiety over increased tortilla prices last year led to government intervention including the capping of prices. Nevertheless, thousands took to the streets in protest as more Mexican corn is being used for biofuels.