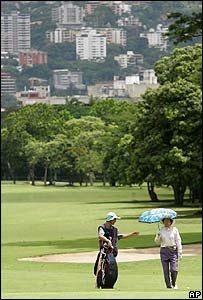 Venezuela's National Assembly may open an investigation against the brothers of President Hugo Chavez. Opposition politico Wilmer Azuaje alleged that Argenis and Narciso Chavez have recently purchased seventeen ranches and these represent “harm (to) the image of Chavez's socialist movement.”

Though some wealthy Venezuelans have left the country due to the “fear of change of daily life” under Chavez, others have seen their riches grow. Despite the rhetoric of a “Socialist revolution” in Venezuela, a recent article on the “Maletagate” scandal noted that a rich elite has prospered under Chavez:

"I wouldn't call these people Chavistas. They are only in it for the money," said Ken Rijock, a money laundering expert who lives in Key Biscayne and has written extensively about the new Venezuelan millionaires…

"It's clear that Venezuela is still a very mercantilist country," said Simon Strong, the Miami-based director of International Risk and Investigations at FTI, a business consulting firm. "I'm not sure that many of those who have benefited on the business side during the Chavez years would make much reference to socialist revolution."