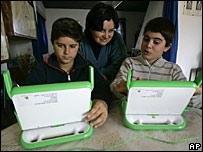 After pilot runs in countries like and , became the first country to place an official order for computers in the “One Laptop per Child” (OLPC) program. The ubiquitous lime green and white XO Laptops began mass production this week in and have been dubbed as the “$100 laptops” due to its cheap price.

The aim of OLPC is to provide the inexpensive computers to schoolchildren in underdeveloped countries worldwide. Thus far has been the only confirmed order with a request for 100,000 laptops including an option to buy 300,000 more.

The OLPC computers have not been without problems; production was set back by several weeks and major firms like Acer plan to produce their own cheap laptops. Nonetheless, OLPC is offering a special “Give 1 Get 1” promotion starting on Monday.