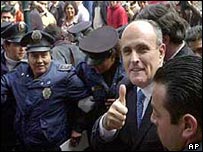 Last week an estimated 15,000 street vendors in were forcibly removed to be relocated to anther part of the city. Despite claims of losing their businesses, the measure was done as Mayor Marcelo Ebard’s plan to “improve quality of life” throughout the city.

Four years ago former mayor Rudy Giuliani was hired as a consultant to lower crime in . One of Giuliani’s main claims to fame as Big Apple mayor was promoting a “civility campaign” against jaywalkers, panhandlers, and street vendors. From an NPR report in 1998:

“(Mayor Giuliani’s) targets have moved from squeegee men, to jay walkers, to sex shops in , to taxi drivers...and now to food vendors. Some New Yorkers think the mayor is targeting immigrant groups out of national political ambitions... others say it's about time New York had a strong mayor who's unafraid to take charge.”

Since the implementation of “Plan Giuliani” some capitalinos have been unimpressed. Crime rates have diminished by about 8% though a 2006 safety report observed that the categories of murder, rape and robbery are 3-4 times greater than those indices in or .

Ebard’s initiatives on street vendors seem to indicate that he has taken Giuliani’s advice to heart. Whether this means a significant improvement to daily life in remains to be seen.