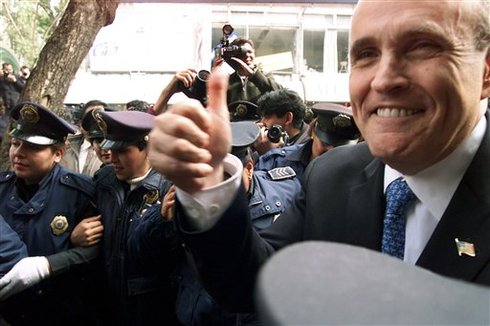 In 2003, a security firm run by former mayor and current presidential hopeful Rudy Giuliani was hired by businessmen to help combat crime there. He even traveled to ’s capital (image) under great hype and declared that:

“‘Although there are differences [between and ]... the situation in some ways is very similar’. But, he said, ‘this is still the beginning of a long process.’”

Fast forward four years later and “capitalinos” are upset with the lack of progress against crime in and see Giuliani as one of the reasons for that. According to a report today in NY1, crime is one the rise in Mexico City and doubts linger over Giuliani's impact despite the promise anticipated by business leaders and civilians alike. One criminologist interviewed for the report claimed that “what Giuliani sold was a myth.”

Mind you, the displeasure with Giuliani’s company is not a new development; as early as 2005, former officials were disappointed with Giuliani Partners:

“‘They were not prepared, not at all,’ said another former police official who worked closely with the Giuliani team, Antonio Rendon. ‘They weren't consultants, they were retired policemen. And they were trying to organize another police force, but not with a methodology or a clear idea.’”

There is little here for argument, but there is less that is relevant given its age and what has happened in Mexico City since Giuliani.

I am struck with the hundreds of times that this story has been appearing recently . . . is it part of an anti-Giuliani campaign?

Quite honestly John I have no idea if stories like this are part of some overall "anti-Giuliani campaign". His seeming lack of progress after being hired in Mexico City is definitely fair game in anticipation of his campaign rhetoric on being strong against crime as federal prosecutor and NY mayor. (This is not to say that Giuliani is the sole or main factor for the rise in crime in "el D.F.." Yet his role there is certainly fair game for analysis).