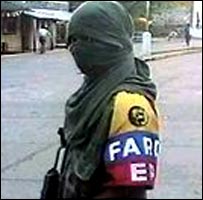 The government of and leftist guerillas of the FARC have given distinct causes over the deaths of 11 legislators killed held captive by the FARC. A communiqué issued by the FARC yesterday said that the hostages were killed on June 18 in the crossfire of a battle between the rebels and an “unidentified military group”. Yet in a news conference this afternoon President Alvaro Uribe denied that an official military campaign took place on that date and accused the FARC trying to hide a “crime against humanity that it committed."

According to the Colombian press, the congressmen’s deaths have been condemned by the U.S. Ambassador to as well as Human Rights Watch.

In addition, RCN reports that a source close to the investigation alluded to the possibility of former paramilitaries involved (as of time of publishing only this message appeared on RCN’s front page):

(Translation: “A source close to the investigation told RCN that the emerging ‘Black Eagles” group could have provoked an attack that the FARC claimed killed the parliamentarians from Valle del Cauca province.”)