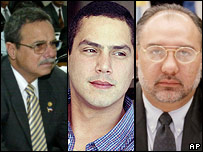 Four Guatemalan police officers were arrested in the killings of three Salvadoran politicians earlier this week. Though the motive of the murders of Eduardo D’Abuisson, William Pichinte and Ramon Gonzalez (image) is unknown, ’s Attorney General believes that it has to do with organized crime. (Surely the fact that those arrested are policemen should raise a red flag).