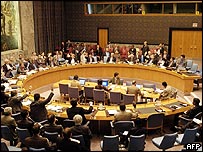 It took 48 ballots and over four weeks of voting but was formally elected today as ’s second representative to the U.N. Security Council (UNSC). Original candidates and dropped their bids last week and reconciled to give their support behind . Both the ambassadors of and the tried to spin the results of the vote with Venezuelan ambassador Francisco Arias Cardenas noting that “for the big countries, it should be clear that they cannot impose”, while ambassador John Bolton observed that “the defeat of certainly accomplishes our principal objective.”

Numerous editorials from the world press have viewed this ordeal as a major setback for Hugo Chavez. The only thing Chavez succeeded in doing was to “deny Guatemala its turn in the international spotlight” according to International Herald Tribune, while an editorial via Scripps News Service deemed the stalemate as a “humiliating and well-deserved defeat” for Chavez. Other editorials ask if the ordeal at the UNSC marks a decrease in Chavez’ appeal internationally and perhaps the beginning of the end for Chavez’ presidency. Nonetheless, ’s Frontline magazine rebuked tactics supporting ’s bid such as bullying small countries with “with punitive economic measures if they did not switch their support to ” or threatening to withhold the sale of military aircraft to .

LOL...“deny Guatemala its turn in the international spotlight”...as if the decades of massive human rights violations (many still continuing today) weren't enough spotlight for Guatemala??? Has anything about that government's behavior changed to make them deserving of a more positive spotlight? I'm fairly certain the answer is "no".

CruiseHeaven said...
This comment has been removed by a blog administrator.
11:09 AM