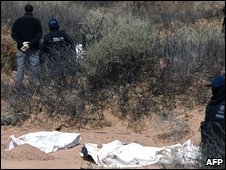 Mexico’s rampant violence, especially in its northern border states, has put the U.S. government on high alert. Senators on both sides of the aisle expressed their deep concerns during a hearing on Tuesday.
"The insatiable demand for illegal drugs in the United States keeps the Mexican drug cartels in business every day," said Sen. Dick Durbin while Sen. Arlen Specter highlighted the “enormous threat” of violence spilling over from Mexico.

During the hearing, the head of Northern Command explained the possibility of militarizing the border. “I think the best response is an integrated approach and we're working toward that aggressively," (Air Force Gen. Gene) Renuart said over the drafting of comprehensive plans by U.S. officials.

According to an “anonymous source” to the AP, the border plan would involve increased deployment of offciers:

Thirty-seven agents from the Bureau of Alcohol, Tobacco and Firearms are being deployed to the region. An official familiar with the plan said the Immigration and Customs Enforcement Agency is considering reassignment of at least 90 officers to the border…

The deployments are part of President Barack Obama's first moves to boost federal security sources on the U.S. side of the border.

The additional immigration agents would double the size of an ongoing ICE task force that has been working with other federal agencies to fight the criminal organizations contributing to the border violence.

Assuming that information is true, it will be interesting to see if this will significantly affect migrants trying to illegally cross the border. Will certain areas be crossed less often? Could the numbers of arrests along the border change significantly? Might the move decrease drug and/or human smuggling?

This will be a disaster on multiple levels. It will do nothing do move forward immigration "reform", will lead to more enforcement first policies and actually increase the violence. What needs to happen is a realistic assessment of the criminalization of certain drugs that fuels the need for drug cartels in the first place.

Criminality is going to flourish on our (Mexico's) side of the border as long as your (the U.S.) side continues to provide arms and cash to the gangsters.

The militarization of fight against the "anti-narcotics export" only took off with the Calderon Administration... which, in turn, may owe it's electoral victory to U.S. interference.

There seems to be a growing question of whether or not the U.S. is really serious about the social and political costs of reigning in its own corruption, and in Mexico about whether the "mano duro" against the smugglers isn't just a quid pro quo for keeping the U.S. from having to deal with its drug, gun and money addictions.

AND... one might add... the U.S. has a huge military bureaucracy. With one war supposedly winding down, you've got bureaucrats in search of a mission. A "War on Drugs" ... and/or Hezbollah in Latin America (what a laugh!) meets the needs of the bureaucrats to continue their funding requests and justify their bloated budgets.

The link of weapons to the US is tenuous, and in fact there are rumblings that the AR-15 derivatives found in the hands of the gangs are of Mexican army stock.

There are three issues that can no longer be obscured:

1. The banks and wall street.

They are being dealt with.

They are being be dealt with.

3. Mexico's duplicity. The nation should look at its own inability to host a modern economy and its brutality towards Guatemalans. The wealth transfer conduit that illegals in the US facilitate back to Mexico will be eliminated, and the border will be heavily fortified.

This is coming. You can bet on it. If Obama does not address it (as in he wants to curry favor with the supporters of illegals) he will be a one-termer. I know that I will not vote for him again if he does not take action to stem illegals and destroy any elements of the drug gangs who surface north of the border.