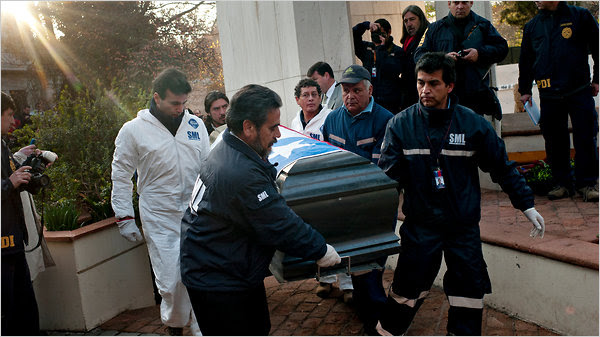 On September 11, 1973 a military coup led by Gen. Augusto Pinochet targeted Chilean president Salvador Allende. Allende remained defiant against the jet planes and troops hammering the La Moneda presidential palace. Eventually he would die and Pinochet would takeover and rule with an iron fist from 1974 to 1990.

The circumstances behind Allende’s death are shrouded in mystery; did he commit suicide with a gun that was a gift from ex-Cuban president Fidel Castro? Or is the official version wrong and was Allende assassinated by troops?

Last week Allende’s body was exhumed in order to try to figure out once and for all how he died. The exhumation, which counts with wide spared political support and the backing of the ruling conservative government, was done as part of a judicial probe brought up by Allende’s family.

Thus far the first step in the autopsy has been completed: making sure that the body in Allende’s tomb is indeed that of the deposed leftist leader. Dental records were used to confirm that the corpse, which had been moved in 1990, was the body of Allende.

The exhumation process has been largely exempt from scandal, which “exemplifies the consolidation of Chile’s democracy” according to remarks made by political scientist Mauricio Morales to Bloomberg. Yet a minor controversy has emerged after a program that aired on Chile’s TVN implied that Allende was murdered. The program on the state television channel cited a “long-lost” and lengthy military probe into Allende’s death. That report supposedly mentioned that Allende’s fingerprints were not on the weapon that he used allegedly to kill himself and that he was not accompanied by three others who were subsequently arrested and "disappeared."

Allende’s daughter, congresswoman Isabel Allende, reacted furiously to the TVN program and she said that she would lodge a legislative complaint against the channel. Furthermore, according to the New York Times:

Senator Isabel Allende, the former president’s daughter, stated that the program was “an insult to scientific intelligence.”

“We are searching for the truth ... but we want that truth to be based on scientific proof, not on journalistic imagination, not on irresponsibility,” she said.