Summarizing the Summit of the Americas 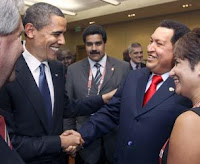 As the Summit of the Americas ends, a brief wrap up:

President Barack Obama urged nations to work together for peace and endorsed the United Nations.

He said the U.S. could learn a lesson from Cuba and send doctors elsewhere to help others. He also alluded to "steps we can take" to build a better relationships with Cuba, the only country not invited to the Summit after U.S. urging in the 1960s.

Obama also tried to counter some of the anti-American or "imperialist" sentiment exhibited in speeches.

He also told the Summit that by admitting when its policies are wrong, the U.S can set a stronger moral standard.

Nicaragua's President Daniel Ortega called Obama "president of an empire" and said he hoped Obama meant what he said about working together.

Finally, Obama is still receiving flack for grinning alongside Venezuelan President Hugo Chavez in the above picture.

Photo: AP via Seattle Times
Posted by Alison at 8:37 AM

Here's some good analysis on the summit, as well, courtesy of Bloggings by Boz:
http://www.bloggingsbyboz.com/2009/04/meeting-successful-declaration-failure.html

'He also told the Summit that by admitting when its policies are wrong, the U.S can set a stronger moral standard.'

Bullshit. After the U.S. abismal record in Latin America, the assumption that the U.S. has the moral higher ground is unwarranted and irks most latin americans. The 'Latin Americanist' should know.