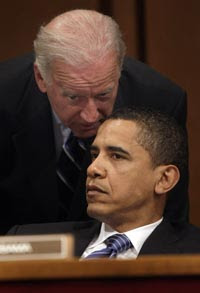 Update: It's official now; Biden will be Obama's running mate.

According to several news stories over the past hour, Democratic presidential candidate Barack Obama has chosen Joe Biden to be his running mate.

The longtime legislator from Delaware is the chairman of the Senate Foreign Relations Committee and this counters criticism that Obama is too inexperienced in international affairs. Yet he’s also prone to verbal gaffes like when he allegedly “dressed down” Obama last year.

What effect does Joe Biden’s supposed vice presidential candidacy have for Latin America and the Caribbean? A search through Biden’s official website provides some clues:

In addition, the very resourceful ontheissues.org lists several of Biden’s viewpoints on foreign policy including his 1995 vote to strengthen the trade embargo against Cuba and his resolution condemning Venezuela for pulling RCTV’s broadcast license.

Assuming that the reports are true over an Obama/Biden ticket, what do you think about it?

Wow, I am bit disappointed. I was hoping he would chose Hillary Clinton.

Erwin - if you look at other blogs, news sources, and times, it looks like you were one of the first to break the story on the internet :) Congrats!

Where is Joe Biden on Cuba? Some additional indication from his public record follows:

Joe Biden: (1:38:31) We have to reach out to the Cuban people right now because he’s not going to last no matter what you say and the bottom line is we have to have a plan. There is no plan. Chris is right. You’ve got to normalize relations with them eventually and it seems to me that’s going to come very quickly.

MN: (1:28:43) Normalize relations whether or not Fidel Castro is in power?

Chris Dodd: (1:27:20) I served in the Peace Corps in the Dominican Republic and spent a lot time on Latin American issues and chaired the [sub]committee of the Foreign Relations Committee for the last 26 years dealing with Latin American. I think we are making a huge mistake by not normalizing relations with Cuba. The only one who is benefiting from this in my view, the only one who has benefited is Fidel Castro. This is outrageous in my view. If you want to create change in the country as we did with the eastern block countries, this is the way, is to allow travel to occur. This is the only country in the world where Americans are not allowed to travel there because our country forbids them from going there. That is how you create change in these countries. This embargo has done nothing but keep Fidel Castro in power. I think we ought to abandon
the embargo, open up travel restrictions and he’ll create change immediately in my view of Cuba.


Also, in 2003 Senators Michael Enzi (R-WY), Max Baucus (D-MT), Larry Craig (R-ID) and Byron Dorgan (D-ND) offered an amendment to the Transportation/Treasury appropriations bill that would end funding for the travel ban to Cuba. A motion to table (kill) the amendment failed 59-36 and the amendment itself passed on a voice vote. Biden voted against tabling, i.e. a vote for allowing all travel.